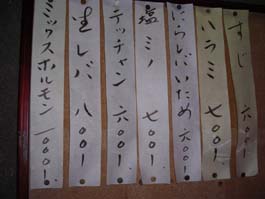 Japanese is one of the most difficult languages to learn to read and write, mixing as it does Chinese characters, known as kanji with two different syllabaries, hiragana and katakana (the latter is used exclusively for writing words which the Japanese have borrowed from other languages); see pp500-1 in Japan by Rail for a guide to these scripts.

That said, basic greetings and phrases are not difficult to remember (see pp500-3) and any efforts to speak Japanese will be appreciated. The Japanese always seem amazed and impressed that foreigners can speak their language, especially given the various levels and subtle nuances that need to be used in certain situations.

A misunderstanding sometimes arises over the meaning of the Japanese word ‘hai’ which is translated into English as ‘yes’. Anyone who has had contact with the Japanese business world knows that the Japanese do not like to commit immediately to a straightforward ‘yes’ or ‘no’ answer to a proposal, at least during a first meeting. Thus, ‘hai’ often means ‘yes, I am listening’ (this also applies when talking on the phone) rather than ‘yes, I agree’. 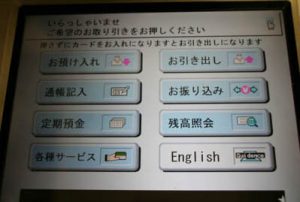 ATM machines can be used in many languages (© KU)

Although nearly everyone in Japan learns English at school, this does not mean they can speak it. Despite efforts to bring more native English speakers into Japanese schools as ‘assistant language teachers’, the classroom emphasis continues to be on written English and grammar, rather than spoken skills.

One of the biggest worries for first-time visitors to Japan is the language barrier. How difficult is it to make yourself understood and navigate your way around the country? The answer is that it’s surprisingly easy; most Japanese can understand some English, even if not everybody speaks it. If you need help, try talking to younger rather than older people. If you can’t make yourself understood, try writing your question down; many Japanese find reading English much easier than listening to, or speaking, it. And consider downloading a dictionary app or two on to your smartphone or tablet. 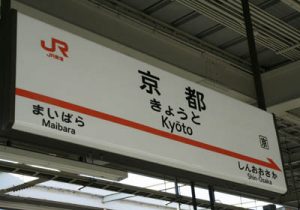 You don’t need to be able to read Japanese characters (kanji) to find your way around: station names are written in English on every platform and on-board announcements are made in English on all shinkansen and many limited express trains and even on local trains in tourist areas; the vast majority of hotels and ryokan have their names written in English outside; in most towns and cities, road signs and street names are in both Japanese and English.

The kanji for most places of interest is included in Japan by Rail, but if going off-the-beaten track ask hotel reception or tourist information staff to write down the name of the place you’re heading for, so you can show it to taxi drivers or passers-by when asking for directions.

If you’re travelling with a smartphone or tablet you can make use of some very useful Japanese-language apps. Touchscreens allow you to draw kanji to find out their meaning as well as look for definitions in the normal way. Imiwa (www.imiwaapp.com; free on iTunes) has a comprehensive dictionary of words and kanji. It is very easy to use and can be used offline; it can be fascinating simply to type in random English words and see what kanji are used to make up the Japanese word.

A similar app called JED (www.umibouzu.com/jed) is available for Android smartphones. Google Translate has free apps for both Android and iPhone and Japanese is one of the 90 languages you can download in advance so not having wi-fi won’t be an issue.

A useful online dictionary is jisho.org though some prefer the original version classic.jisho.org. There are also various phrasebook apps with useful recorded sound files: try Japanese Phrases & Lessons (free on iTunes, or £6.99 with a much-expanded set of phrases).

For a list of railway-related words and phrases see p502 in Japan by Rail.

Toilets in Japan have an incredible range of functions and sometimes they are only written in Japanese. However, don’t worry, this is relatively rare nowadays and even if you do find you are in a toilet with instructions only in Japanese, all you need to do is look on p78 of Japan by Rail as we give all the translations! Toilet manufacturers in Japan have used some different symbols but there is now agreement between the various companies to make sure all control panels have the same symbols.