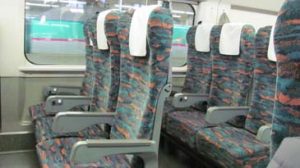 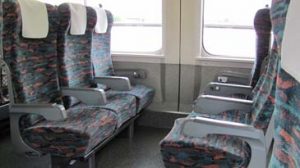 Shinkansen seats facing each other (© Japan by Rail)

The aim of this page is to give you an idea what travelling on a train in Japan is like.

One particular feature is that (other than on local, and some rapid, services) at the beginning of a journey seats are always turned to face the direction of travel. However, if you are travelling in a group, and no one else is using one of the seats, you can turn one lot round so that the seats face each other. 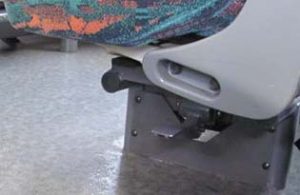 Lever to change way seat is facing (© Japan by Rail)

On top of this seats can recline; some seats also have foot rests. 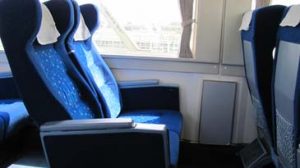 One advantage of shinkansen and limited express trains is that the leg space between seats is very good; unless your luggage is very bulky there is probably space for it in front of your legs. Alternatively if you don’t want to put it on the rack above the seat there is space for luggage at the back of the carriage.
Virtually every train has toilets at the end of each car, or alternate cars, but limited express and shinkansen services almost always also have an area where you can do make up or just refresh yourself without needing to use a toilet. There are also rooms where mothers can feed or change their baby’s nappy. 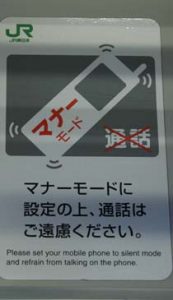 Most of these services also have facilities for disabled passengers and one thing we think is particularly good is that a lot of trains have information in braille for passengers with limited sight.

Mobile (cell) phones should be put on silent mode. If you want to talk on a phone on a train you will have to go to the area between the compartments; texting is OK though the main thing is to be as quiet as possible. Some shinkansen still have public phones though these are expensive to use and you will need to have a phone card. 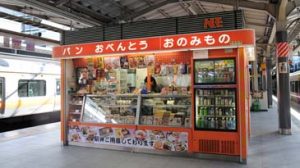 O-bento stand on a platform (© KU)

On the back of the seat for all shinkansen and in some limited express trains you can see plans of the train layout which make it easy to find out which way you need to go to find whatever service you require.
In terms of food and drink it is best to buy whatever you want before you get on a train (see below). This is because there are now far fewer trolley services on trains than there used to be, and also few buffet cars. Some trains have a few vending machines but their stock is limited and generally consists of drinks. 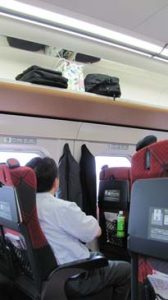 Luggage space on an E7 shinkansen (© Japan by Rail) 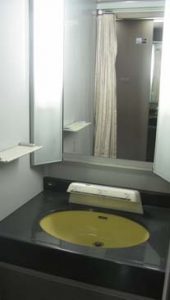 Most shinkansen have an area with a basin and mirror that is separate to the toilets. (© Japan by Rail)

However, JR East and JR Hokkaido provide a menu in the back of seats for some services so you can get whatever is on the menu if a trolley service does pass. The food available also often reflects the region you are travelling through, particularly for ekiben. Increasingly there are vending machines on trains, though mostly serve drinks, not snacks.
On platforms at most stations there will be a Kiosk and a bento stand; the former sells snacks and drinks and the latter sells ekiben (Japanese-style lunnchboxes) and sandwiches. Another common sight is a place to get noodles (udon or soba).
There are also lots of rubbish bins which is part of the reason the stations are so clean; Smoking is completely banned but most stations have an area where smokers can go.