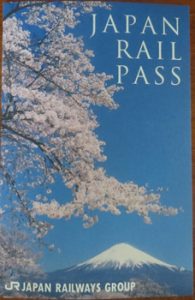 The Japan Rail Pass is truly the bargain of the century, assuming you plan to use several shinkansen (bullet train) services. It entitles the pass-holder to travel freely on: almost all JR services including shinkansen, other than the Nozomi (Tokyo to Hakata) and Mizuho (Hakata to Kagoshima-chuo); the ferry service to Miyajima (see p309) operated by JR; and some of JR’s bus services, though not their highway bus services.

Who can use the Japan Rail Pass?

The pass can be used by any non-Japanese passport-holders visiting Japan under ‘temporary visitor’ status but not by anybody arriving in Japan for employment. Japanese nationals who have lived out of Japan for 10 years or more can get a pass but only through an agent (see pp37-9 in Japan by Rail for details) and possibly only up till 31st December 2023. For more information see Japan Rail Pass.

Bought from an agent outside Japan

Bought in Japan, or through the JR website before you go

Notes: Prices are fixed in yen, but the charge is payable in local currency. The prices in brackets are for guidance only. The dollar ($) rates are US dollars.

Children aged 5 and under travel free providing they do not occupy a seat; those aged 6-11 pay half the adult rate. The adult rate applies to everyone aged 12 and over.

The cheapest way to get a pass (sold in the form of an exchange voucher; see p39 in Japan by Rail for details) is to buy one through an authorised agent no earlier than three months before you plan to go.

A more expensive option is to buy one when you arrive in Japan. However, for the same price (see below), it is now possible to order a pass through a JR website from a calendar month before you plan to use it Japan. The advantage of this new style pass is that you can make seat reservations online before you go to Japan (as long as you have ordered a pass); and use it at the automatic ticket gates. For further information see the box on p39 in Japan by Rail.

However you get a pass you can buy as many as you want, but only up to six at a time for the online option.

Pass length   The options are a 7-, 14- and a 21-day pass; all are for travel on consecutive days from the date you start to use the pass

Class of travel  The next step is to choose which class you’d like to travel in. The Ordinary Pass is valid for standard-class rail travel, which is likely to be more than adequate for most people. Seats in Ordinary Class are comfortable and have ample legroom; on some trains they are as good as first-class rail travel elsewhere in the world. The Green Pass is for those wishing to travel in more style. Green-class carriages (known as ‘Green Cars’) offer seats that are wider, recline more, and have even more legroom as well as a foot rest; there is also more luggage space. However, there are no Green Cars on most services on the Sanyo shinkansen line (Shin-Osaka to Hakata), or on Tsubame shinkansen (Hakata to Kagoshima-chuo) in Kyushu. Most limited express (LEX) services have Green Cars but local/rapid trains generally only have Ordinary Class.

Is it worth buying a Japan Rail Pass?

As stated above we believe the Japan Rail Pass is a fantastic bargain and that it is almost always worth having for a trip to Japan.

However, for some itineraries this may not be the case. We analysed LR’s 13-day itinerary (see Itineraries) and found that the total cost of the travel with seat reservations in most cases and using:

To cover the whole period it would have been necessary to buy a 14-day Japan Rail Pass – since a 14-day Ordinary Class pass now costs at least ¥47,250 it clearly would have been a waste of money. Even buying a 7-day pass for part of this trip would not have been worth it at any stage.

The main reasons for this conclusion are that this trip

In summary: as we say in Japan by Rail, if you plan to take a return trip on the shinkansen between Tokyo and Kyoto even with a 7-day pass you will almost always save money as you will definitely need to get to and from the airport and are likely to have at least one other journey on a JR service.

If you do not plan any long-distance shinkansen journeys it may be worth considering other options – one of the regional JR passes could prove better in your circumstances. Or, it may be better to buy tickets as you go – this doesn’t need to be time consuming as if you have planned your itinerary you could buy most of your tickets when you first arrive rather than whenever you need to travel. Also, if you get an IC card (such as a Suica, Pasmo, or other such card; see p66 in Japan by Rail) and keep it topped up you can use that for most journeys on ordinary trains, whether JR or private.