↓ Skip to Main Content
Home › About Japan › Money and costs 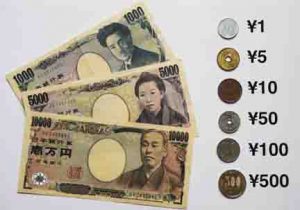 Traditionally Japan has been a cash-based society but things are changing and pre-Covid foreign-issued credit cards were accepted in most upmarket and chain hotels, upmarket restaurants, department stores and at JR ticket offices (but not at all ticket machines). Covid means it is likely even more places will have changed to card payment but it would be worth having a supply of cash; ideally bring some yen to Japan with you but see p80 in Japan by Rail for information about withdrawing cash from ATMs in Japan. If you are expecting to use lockers and buses and don’t have an IC card (see box on p66 in Japan by Rail), have a supply of ¥100 coins, though buses do have change machines.

Note that when you are being given change in a shop, hotel or restaurant, staff are likely to use a calculator to show what the bill came to and then what change is due; you will be given the relevant bank notes first and then coins, so don’t panic if it seems you are just being given notes.

For such a sophisticated economy, banking practices remain somewhat archaic; banks are open Monday to Friday from 9am to 3pm only and many ATMs at banks do not accept foreign-issued cards. The good news is that all post office ATMs as well as branches of 7-Eleven convenience stores accept Visa, MasterCard, American Express, Cirrus, Maestro and JCB.

ATMs at 7-Eleven convenience stores are open 24 hours a day; post office ATMs in major cities are open more limited hours (Mon-Fri 9am-7pm, Sat to 5pm, Sun to noon). On-screen instructions are available in English and some other languages and the single transaction withdrawal limit is ¥50,000.

Consumption tax (called shohizei) (10%) is levied on nearly all goods and services in Japan, but you won’t necessarily notice it in shops because the tax is already included on price tags. However, foreign tourists can buy many goods tax-free – look for the sign saying ‘Japan Tax-free shop’ in shop windows. You will need to show your passport but the advantage is that the tax will be deducted immediately. Note that if you take food out (from a supermarket or convenience store) the tax is 8% but if you eat in it is 10%.

Hotel rate-cards usually show room charges excluding and including tax; charges quoted throughout Japan by Rail refer to the room rate including tax. However, a special accommodation tax is levied on rooms at hotels and ryokan in the Tokyo metropolitan area, as well as the Osaka area, Kyoto and Kanazawa. The amount varies but is generally ¥100-300pp per night, though in Kyoto is ¥200-1000pp. This is not included in the rates quoted. Additionally, upmarket hotels levy a service tax of between 10 and 20% on top of the 5% consumption tax. Room rates quoted in Japan by Rail) are mostly on a per-room basis and do not include service taxes unless otherwise stated.

There is no culture of tipping in Japan but see box p72 and p75 in Japan by Rail.

Contrary to popular belief, a visit to Japan doesn’t have to be expensive but it is important to plan your budget as it is an easy country to spend money in.

Package tours which include travel by rail (see pp37-9) Japan by Rail) rarely offer better value than organising an independent trip. From the UK you’re probably looking at a minimum of £3000 for a 14-day tour including return flights, rail travel, accommodation in basic Japanese inns, some meals and the services of a tour guide.

Package tours which include travel by rail (see pp37-9 in Japan by Rail) rarely offer better value than organising an independent trip. From the UK you’re probably looking at a minimum of £3500 (US$4000 from the USA) for a 14-day tour including return flights, rail travel, accommodation, some meals and the services of a tour guide. Given that a 14-day rail pass bought outside Japan costs ¥47,250 (£312/US$408) and online or in Japan ¥52,960 (£349/US$458), it would certainly be more cost effective (and more fun) to organise your own trip.

Note: The budgets below do not include travel costs because they assume you have a Japan Rail Pass. The exchange rates are rounded up/down for convenience.