The JR East network covers the Tokyo metropolitan area and extends north and east of Tokyo including the route around Tohoku (see pp318-54 in Japan by Rail) as far as the northern tip of Honshu; it does not include Hokkaido.

The main passes include travel on the Narita Express (N’EX) from Narita Airport and the Tokyo Monorail from Haneda Airport. They are also valid on Tobu Railway’s Limited Express services to Nikko and Kinugawa-onsen and on local services between Shimo-Imaichi and Kinugawa-onsen.

Some of JR East’s passes are also valid to places covered in the Central Honshu section such as Matsumoto, Atami and Odawara (though for the latter not using the Tokaido shinkansen), and on some private lines such as the Izu-Kyuko line to Izukyu-Shimoda (for Shimoda). A seasonal option (Apr-Nov) available with any JR East pass is the Tateyama Kurobe Option Ticket (see p186). 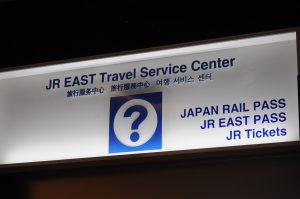 The pass can be bought through some of the agents listed in Japan by Rail (pp37-9), online through the JR East website, at Narita and Haneda airports, or at Travel Service Centers in the JR East area.

Exchange vouchers can be exchanged for a pass at Travel Service Centers in Narita and Haneda airports as well as at certain travel service centers and information counters at stations in the JR East area.

JR East passes are only available for Ordinary Class. The prices in brackets are for rough guidance only and are based on the exchange rates quoted in the 5th edition of Japan by Rail. The exact cost will depend on the exchange rate used by your rail pass agent at the time of purchase. It’s worth shopping around as agencies apply different exchange rates. If bought in Japan the passes cost ¥1000-2000 more.

Children aged 5 and under travel free providing they do not occupy a seat; those aged 6-11 pay half the adult rate.

In addition to the network area outlined above the two main other lines this pass is valid on are the Iwate Galaxy Railway and Aoimori Railway. It is also valid for reserved seats in the Hayabusa and Komachi shinkansen – and of course all the other shinkansen in the region. It can also be used on some JR East bus services. Note that this pass is not valid on the Hokuriku/Nagano shinkansen beyond Sakudaira. 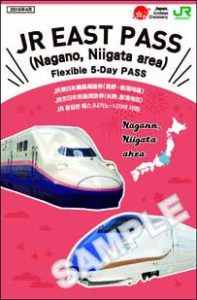 This pass is valid on the routes outlined (in the intro text) above, including some private lines, but for the Tohoku shinkansen only to Utsunomiya, the Hokuriku/Nagano shinkansen only to Joetsu-Myoko, and the Joetsu shinkansen to Niigata. It is also valid to Matsumoto and in the ski season to Gala Yuzawa (see box on p354 in Japan by Rail for details).

For itinerary suggestions for both passes, see pp44-5 in Japan by Rail for details.

This 3-day pass (¥10,180; £67/US$88) permits unlimited travel in the Tokyo metropolitan area as well as Ordinary Class travel on JR East’s shinkansen (except Hayabusa/Komachi services) from Tokyo to: Sakudaira (Hokuriku shinkansen); Echigo-Yuzawa (Joetsu); and to Nasu-Shiobara (Tohoku). It is also valid on some private lines.

In effect this pass covers everywhere shown on the Around Tokyo colour map (see Japan by Rail for details), other than the Hakone region. The designated area includes: Nikko (JR or Tobu services); the Kawaguchi-ko area; Kawagoe; to Odawara (for Hakone) but not on the Tokaido shinkansen; to Izukyu-Shimoda (for Shimoda); Kamakura; Yokohama; Narita and Haneda airports; and the New Shuttle line (to the Railway Museum). In the ski season it is also valid on Joetsu shinkansen services between Echigo-Yuzawa and Gala Yuzawa; pass-holders are entitled to some discounts at the resort.

If this pass is used on shinkansen services on one day at least and you don’t mind doing day trips rather than staying over this pass would provide excellent value. It means you can be based in Tokyo for several days but do a lot of sightseeing and then possibly only need a 7-day Japan Rail Pass for a 14-day holiday. However, note that this pass can only be bought in Japan.

Hokuriku Arch Pass  This pass is valid for travel between Tokyo (inc Narita & Haneda airports) and Osaka (inc Kansai International Airport) using the Hokuriku shinkansen (Tokyo to Kanazawa) and the Thunderbird Limited Express (from Kanazawa to Osaka). It is also valid on JR lines in the metropolitan areas of Tokyo, Osaka, Kyoto and Kobe as well as to Nara; and for some side trips from the Hokuriku shinkansen.

If travelling for a week and only really wanting to visit Tokyo, Kanazawa and Kyoto/Osaka this provides better value than a 7-day Japan Rail Pass.